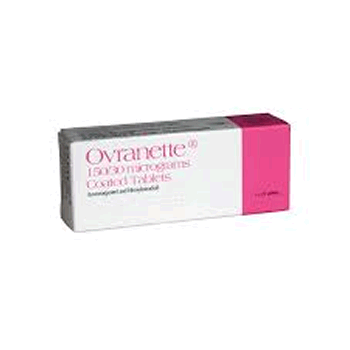 Ovranette is a type of hormonal contraception, it is more commonly known as the ‘the pill’, ‘combination pill’ or ‘combined oral contraceptive pill’. As well as assisting in preventing unwanted pregnancies, this medication can also be prescribed to treat Endometriosis and Menstrual disorders. It contains, ethinylestradiol and levonorgestrel which are the active ingredients in this contraception. These active compositions are synthetic versions of naturally occurring female sex hormones oestrogen and progesterone. Another benefit of taking Ovranette is that it can result in lighter, less painful and more regular menstrual bleeding.

In so doing, an egg won’t be ripened and released each month. As well as tricking the body into thinking an egg has been release Ovranette also makes it harder for sperm to cross from the vagina into the womb and fertilise an egg if there is one there, by increasing the thickness of the natural mucus at the entrance to the womb.

This double action offers double the protection from pregnancy however another effect of this pill is that it also changes the quality of the womb lining making it difficult for a fertilised egg to become implanted on there.

Taking Ovranette which is a monophasic pill (meaning that each tablet has the same dosage of hormones contained within), should be started on the first day of your menstrual cycle and will give you protection from pregnancy. If you forget to take a pill, don’t worry – simply take the next one as planned and try to ingest the treatment as a routine, i.e. at the same time of day.

Are there side effects associated with Ovranette?

There can be a number of side effects to taking Ovranette, if you are feeling unwell or have any concerns about the medication you should contact your doctor.

How do I order Ovranette

For your convenience you can complete a free online consultation with one of our qualified and authorised medical practitioners at UKMedix.

If our specialist is satisfied that Ovranette is suitable for you they will issue a prescription to you and dispense the medication from our UK Registered Pharmacy for next day delivery.